This wild flower doesn’t look very important, but it’s one of the few plants that may be in flower at any time during the year, which is good news for any bees out flying on warmer days during January and February as it’s one of the few sources of nectar for them at that time of year. Although it’s usually classed as a weed, it’s not too invasive, and it’s pretty easy to remove if we want to – unlike the white clover and self-heal that took us most of last year to get under control – so we tend to leave it unless we really need the space for something else.

Here’s one of the clumps near the comfrey in the third bed down from the car park end, surrounded by twigs and bits of conifer that blew down in the storm last week. 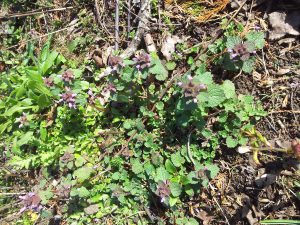