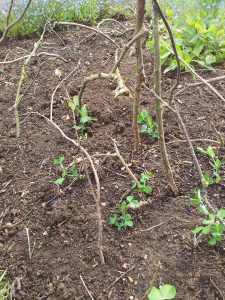 You may have noticed the new addition to the preschool’s planting (in the third bed from the war memorial) –suggestions have included ‘an arty stick sculpture’ and ‘large immobile stick insects’. In fact we’re trying to discourage the local cat or cats who think the preschool’s vegetable area is an ideal cat litter tray; we couldn’t let the children do the planting themselves this year, as there were so many messes around the plot. But they watered the peas in well, and sowed carrots, and hunted for sticks to support the peas and protect them, so they had a good time in the garden again.

The Royal Horticultural Society (RHS) has just published their report on ‘Gardening in a Changing Climate’, which covers many aspects in considerable technical detail, all fully referenced. Very interesting, with a lot of useful advice, particularly in the section ‘Garden management and design within a changing climate’. It can be downloaded free of charge here https://www.rhs.org.uk/science/pdf/RHS-Gardening-in-a-Changing-Climate-Report.

They also have a simpler guide at https://www.rhs.org.uk/science/gardening-in-a-changing-world, which covers many of the topics that guide the way we manage these Memorial Gardens, such as using (less) water, and avoiding the use of peat. There’s also a section on how you can recognise waterlogging and flooding in your garden, though as we’ve only had one short shower since 22 March, that’s not our problem here at the moment! 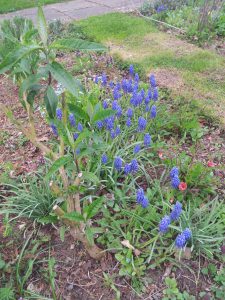 Bees don’t usually visit daffodils, but they make an exception for these smaller, white ones called ‘Thalia’: 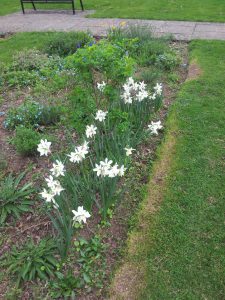 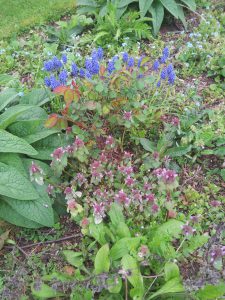 This is yet another in a series that should be called ‘Photos taken just after the bees flew off’ … there were half a dozen different bumblebees on these three plants mid-afternoon today. Bees like to find a lot of one flower – a crop, in effect – and the gardens are really beginning to provide that. 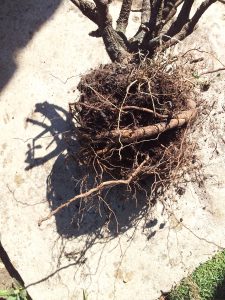