There’s still plenty of different flowers for the bees, as well as different colours, heights, foliage and textures to delight passers-by: 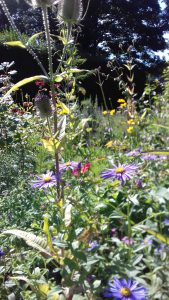 “What do you do with all the bits you cut off?”

A slightly older child (see yesterday’s post) asked me this yesterday while I was pruning the lavender. As well as all the old flower stems and lavender leaves, we’d amassed quite a pile of knapweed and other spent flowers, and a trug-full of weeds – mainly sheep’s sorrel, which is great for bees but tries to take over the whole plot, as do white clover and self-heal, which in our naivety we originally encouraged.

Well, we used to stuff them all into old potting compost bags and carry them home or to our various allotment plots, and compost them there, and then bring the compost back a few months later to put round the gardens. There had to be a better way than that, so we asked the town council if we could put a couple of ‘Dalek’ compost bins round the back, in the service area behind the Bowls’ Club. A quick appeal on Freegle, and a couple of donations from people interested in what we’re doing, and we now have five Daleks close at hand to take all the green waste: 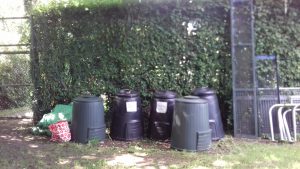 The signs say ‘Compost collecting’ and ‘Leaves only’, as we wanted to make leaf mould to get more organic matter into the soil, but we’ve now got a lot more ambitious as we’ve found several more sources of leaves, so the town council has let us construct this rather optimistically-sized bin out of metal poles and wire netting: 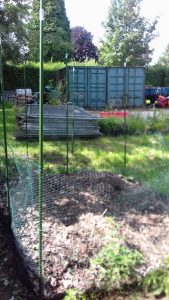 We’re looking forward to November this year, when we can fill one half with leaves and start the long process of letting them rot down into black gold – organic matter with very few weed seeds, to use as a mulch to keep moisture in, and keep weeds down, and as a soil conditioner.

“Why are you cutting down our bees’ lavender?”

“Why are you cutting down our bees’ lavender?” said a voice behind me while I was pruning the lavender bushes along the paths. The voice belonged to one of the older children from the local preschool, who often come and help us and watch the bees, dragonflies and other insects as they visit the different flowers – clearly the message had got through!

I explained that the flowers were over for this year, and we needed to trim the plants back so that they’d produce lots more flowers next year. ‘Next year’ is probably quite a vague idea when you’re not yet five, but fortunately the explanation was accepted. Bees visit many other flowers at the moment (we try to have at least two ‘bee magnets’ in flower at any time throughout the year), but it’s true that they go straight for the lavender when it’s out.

The lavender border was started a couple of years ago, when we realised that we needed more structure in the gardens so that they carried on looking good after most of the flowers had faded, particularly as we tend to leave seed heads for insects to hibernate in over winter, and just to look good when there’s not much else happening in the dark cold days. This could look untidy without the more formal structure of the lavender border. Most of the plants are compact varieties – Hidcote, Munstead, Dwarf Blue, Little Lady, Arctic Snow – as although the larger varieties attract more bees, they’re also much harder to keep in check, and would soon take over the paths as well as the beds.

The standard memory aid for pruning lavender is ‘8:8:8’ – prune the bush to eight inches on the eighth day of the eighth month. Not quite so effective if you think in metric! But the general rule applies – trim the plants as soon as they’ve finished flowering, to roughly 20cm all round. Hopefully, we still have a couple of months of warm weather to encourage them to put out new shoots and fill out a little before they stop growing for the winter.

However, to mollify the child who was worried about the bees having no lavender to visit for nectar, we’ve left a few of the later flowers for them!