This is the time of year when gardening programmes and magazines exhort us all to make leaf mould; and coincidentally, it’s the time of year when I find myself eyeing up all the piles of leaves along roads, in parks, on lawns and on pavements, and wish I had time and space to collect them all. It’s a lot of work in November, but all you have to do then is leave them for a year or two, and they turn into black gold – a free soil conditioner, seed compost, weed suppressant and reducer of hours spent watering in the summer.

Perhaps most importantly, it increases organic matter in the soil, which helps plants take up nutrients. We also use garden compost, but that adds nutrients too, which isn’t always what you need – sometimes it can make plants grow too lush, which makes them less resistant to wind, storms and drought; and many wild plants and Mediterranean herbs like lavender and rosemary prefer soil with fewer nutrients. But leaf mould adds plenty of organic matter, which increases the populations of invertebrates, fungi and microorganisms in the soil, which seems to have helped the plants in the Memorial Gardens establish quickly and thrive.

It also makes the beds look good – here’s part of the Mentmore Road Under-5’s bed that we were weeding and mulching this week, to tidy the gardens before the Remembrance Sunday service: 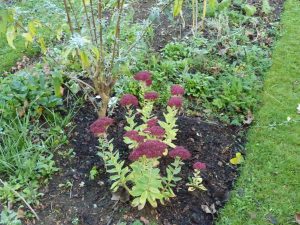 The next job will be to thin the forget-me-not seedlings – we want some of them, but we can’t keep them all or they’ll crowd out the snowdrops and grape hyacinths they’re growing through; once we’ve taken them out, we’ll add yet more leaf mould mulch. to keep those bulbs happy.

The forget-me-nots are really useful in the spring, when the bees emerge and need a lot of nectar – we always think there won’t be enough flowers out, but with the self-sown ones, there always are. We add thick layers of leaf mould in the spring, to block light and stop weeds from germinating – though we do try avoid areas where we want forget-me-nots or California poppies to seed themselves around.

We also find the soil then soaks up water like a sponge, and holds it – you can see the difference between areas that have had leaf mould applied and those we haven’t had enough for, which tend to puddle, then dry out quickly. This year we hardly had to water at all, even with three dry months in spring.

And at this time of year, we pile leaf mould up over the dahlias to insulate them against the cold – we don’t really have anywhere to store them if we lift the tubers, and the last couple of years they’ve all survived fine under their leaf mould blankets.

Up till now, the only problem has been getting enough of it. We’ve been very lucky in that the Town Council had spare leaf mould this year, so we’ve been able to use that; and we’ve  now built a large chicken wire bin near our compost area, and started collecting leaves to fill it. Leaves rot down by a different process from garden compost, which rots through bacterial action; leaf mould rots down mainly by fungal activity). There are two bins, each two metres square, and about 1.80 metres high; a couple of weeks ago they looked very empty and daunting, but some of the team have been raking up leaves from the Memorial Gardens and the playing fields, while others have bagged up leaves from home and brought them over. We’ve been promised more from other organisations round the town, and most afternoons some of us are out raking them up – on warmer, sunny days it’s a great way of getting plenty of exercise, though it’s a lot less enticing when it’s freezing cold and wet. Still, it’s always good to focus on how much less weeding and watering work we’ll have to do next year as a result of all our work now! 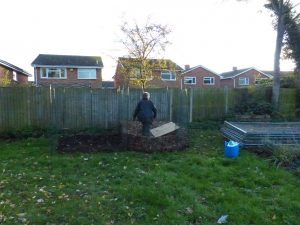 One of the team treading this year’s vintage of sycamore, hawthorn and maple leaves.

Difficult to photograph against the low winter light, but that leaf mould bin is now higher than we are! Thank you to Leighton Buzzard Narrow Gauge Railway for filling bags for us when they cleared the lines before starting the Santa Specials; and thank you to the Town Council’s ground staff, who cleared a lot of leaves from the park before Remembrance Sunday and took them over to the bin for us, to the children from Pulford School, who collected leaves from their playing fields (not forgetting Barry who organised the deliveries), to John Milebush and John from the allotments, who both gave us a lot of bags of leaves, to Penny and Janet who let us go and rake up the leaves in their gardens, and last but definitely not least, to members of South Beds Friends of the Earth, who saved bags of leaves for us. This will rot down to about a third or a quarter of its current size, hopefully with the bit in the middle rotting fast enough to provide us with leaf mould next growing season. Thank you all! 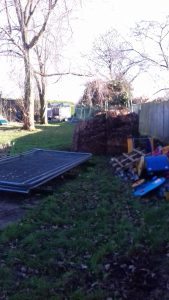