We’d usually start the spring clear-up towards the end of February, removing most of the old stems and seedheads to make way for new growth coming through. But this very cold weather means we need to leave everything there to protect the new shoots coming through, so the clear-up will have to wait until more normal late winter weather returns. So we’re planning and taking stock of progress in the beds so far. 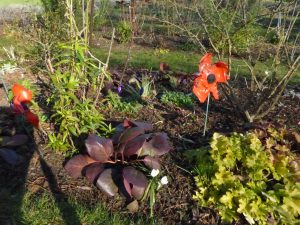 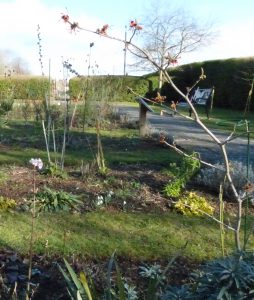 Some years, bees have been flying on warm days in January, and there were a couple of bumblebees around here a couple of weeks ago, on a cold day in February. Anyway, the pollen and nectar are there for them when the weather does improve, and in the meantime we can enjoy the first flowers of the year.

We’re been planning what to put in the bed where the Mentmore Road Under-Fives help us. 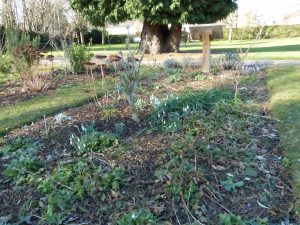 We pruned the buddleia in the middle a couple of weeks ago, and it’s sprouting new growth again already; the snowdrops we moved last year have come back underneath it, too. We’ve moved some of the Stachys byzantina (lamb’s ears) from the bottom bed by the memorial, to this bed, where it’ll get more sun, and where the children will be able to enjoy stroking its soft, silky leaves. That bottom bed doesn’t get much sun until later in the year, as it’s shaded by the trees along the southern boundary, and the huge conifer to the west. We’ll probably have them plant some early potatoes near the end of term, to be ready for digging up during the summer term; and even if the cold weather continues for a couple of weeks, they could sow peas in pots, to be planted out after the Easter holidays. And we’ll probably sow some pot marigolds with them there, too.

And finally, here’s a reminder of what the bed next to that one looked like just yesterday morning, before the snow, with its mixture of crocuses for the new year, and Michaelmas daisy seed heads from the old one, reprieved for another week or two: 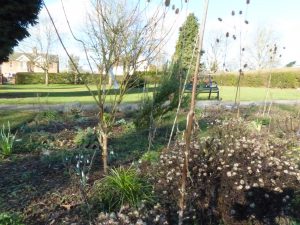