We didn’t take as many photos as usual this year, but here’s one of the gardens a couple of weeks ago – still lots of interest as we go into October, quite a bit of colour, a lot of height, and many interesting seed heads that are attracting goldfinches and other birds already. 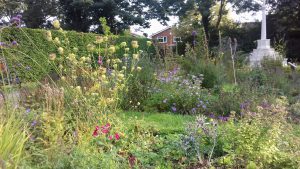