We’ve had one or two poppies and cornflowers out for a week or so, but suddenly this morning, here they are! 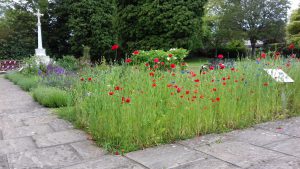 And one of the standard roses (Rhapsody in Blue) has joined them, too: 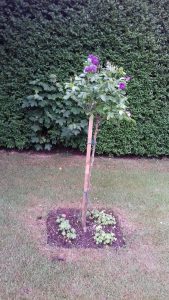 We’ve started trying to meet up more often with the children from Mentmore Road Under-Fives, as we all enjoy it and they remember things better after a couple of weeks than after a month! – particularly when they’ve been sowing seeds. This year they sowed peas in pots – getting the multipurpose compost into the pots was all part of the fun – and they’ve been out much more often to water them than we managed last year.

A couple of people who themselves run community gardens have asked for any advice about gardening with very young children. I wouldn’t say we’re experts! But from trial and error, we’ve found that watering is probably the very favourite activity, with digging around in earth or leaf mould a close runner-up. 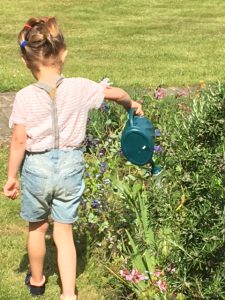 ring, we’ve learned a number of things that make it easier and more fun –using child-sized watering cans (ours were a couple of pounds each from the local Homebase) and having fewer cans than the number of children, it’s much easier to keep an eye on the children that way (water travels fast, and soaked feet / t-shirts / other children spoil the event for everyone). We only fill them half full, because that makes turns come round again faster, and there’s less water to be spilled. We’ve found that the newer children, the two- or three-year-olds are pretty good at waiting for just one or two other children to empty their cans before it’s their own turn. A couple of things that make a difference, that we’ve learned over time – 1) if the tap’s quite a way away, bring plenty of water over before the children arrive as it keeps one more adult in the mix for longer – we now take four ten-litre water containers round to the garden (because that’s what our wheelbarrow will hold comfortably) and fill them from the tap before the children arrive. Also, it’s much easier to fill tiny watering cans from one adult-sized watering can than directly from the containers. 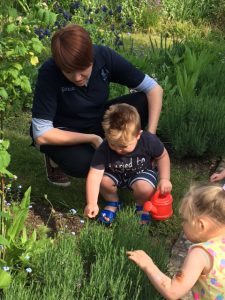 Sometimes the children bring their own watering cans! 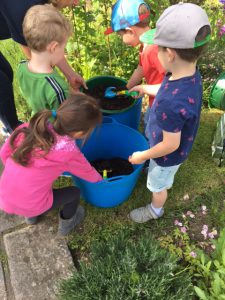 This last week we also thought of something for the children to do while waiting for their turn. We have a lot of leaf mould that we’ve gathered over the last couple of years, and store in our work area round the back; we bring in a compost-bag of this and decant some into a trug, then have the children sieve it into another trug. We can get four children round one trug comfortably, with room for adults to help too. Then when their friends have watered bits of the garden, they go along and put leaf mould out round the plants, like tucking in the plants under a blanket. This keeps the moisture in for longer, and keeps weeds down, too.

Mind, towards the end of the session we  let them just throw the leaf mould onto the flower beds, well away from the paths – most of it falls on the earth anyway, and any that doesn’t get shaken down pretty quickly. And they love it! 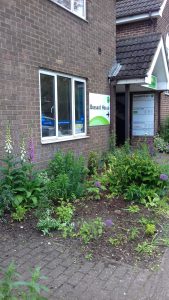 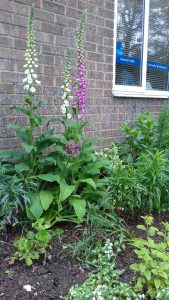 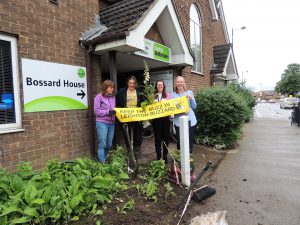