As I mentioned in the last post, we’re experimenting with growing a few perennial UK native plants, to take over from the poppies and cornflowers as they fade.

At the moment, the small scabious and knapweed are taking over at the same height as the poppies and cornflowers 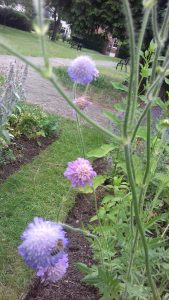 Small scabious in another bed 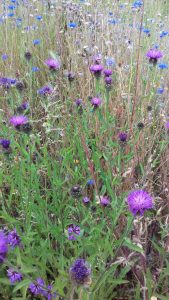 while nearer the ground we have geranium sanguineum  and yarrow keeping the show going: 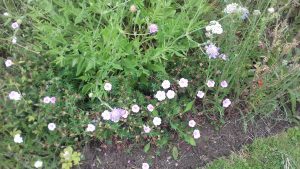 In a previous post I mentioned that poppies in particular grow best in newly-disturbed soil, which is why we’ve emptied that end bed in the autumn in previous years and forked it over. However, there have been a number of really great displays of poppies just growing in grass this year, as on Soulbury Road grassy bank, so we’re going to try something different this year – we’ll add a few more clumps of perennial wild flowers through more of that end bed, hoe between them to disturb the soil a little, and sow the poppy and cornflower seeds there. That should distribute the flowers more evenly while still keeping the display going through the whole bed. 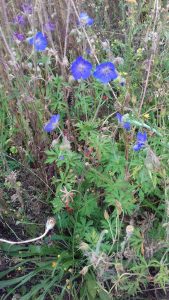 We also have a couple of meadow cranesbill plants at the Bowls Club end of that bed, and some tall wild carrots, some of whose flower heads are just beginning their characteristic turning inside out, to form urn-shaped seed heads that will last well into winter.

But we will still keep a poppies-only strip at the front – we have to have poppies here in front of the war memorial, and where better than a great display just as you come in from the car park?