I’ve written earlier about how tricky it can be to grow wild flowers, and how we’ve been warned that poppies prefer to grow in newly-disturbed soil – we knew about the ‘disturbed’ bit, but just how often can we produce the ‘newly-disturbed’ area they like? Anyway, we had another go this year, and in line with not digging or forking the soil over (because it destroys the soil structure), we just hoed it after lifting this year’s dead poppies.

Then a couple of weeks ago, the children from the local preschool (Mentmore Road Under-Fives) came round to help us. They raked the soil level again and added leaf mould liberally, then sowed pinches of poppy seed saved from this year’s crop. Then the seed had to be in good contact with the soil – in some situations, this is done by animals trampling the seed in, so the children duly became very obedient cows, and stomped all over the area they’d sown. They thoroughly enjoyed being not only allowed to step on the bare earth, but positively encouraged to do so! 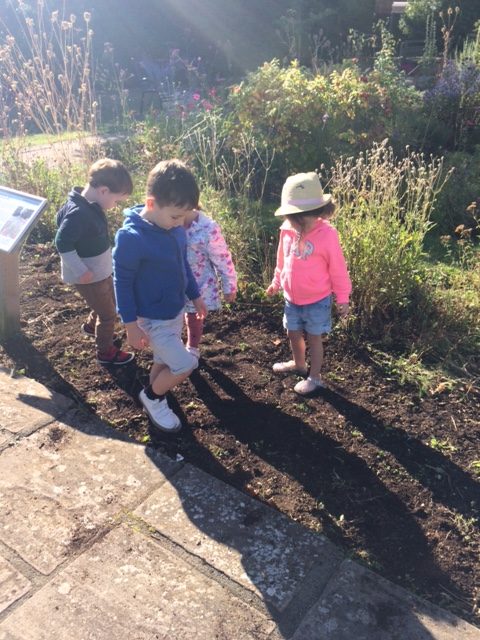 And ten days later, their seeds germinated; there are hundreds of tiny seedlings that you can just see if you know where to look. When the children came round again this week to lift the carrots they’ve been growing, they were able to see how well they’d sown them. And we know we’ll have poppies again in June, as usual.