We’re always showing photos of the garden when it’s in full bloom – I thought it was time we showed it at the start of the year, even before we start the spring tidy-up in a week or two. We did cut down some of the wild carrots today as they were breaking off, and we’ve stacked the old stems round the back by the compost bins, so that any hibernating insects can wake up and fly off, rather than being trapped in the bins. Most clearing will wait for another week or two. 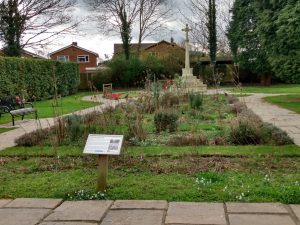 We planted snowdrops last year, and the year before – they’re still there, and some have spread to the wild flower bed (nearest the car park), but they’re not really thriving yet. 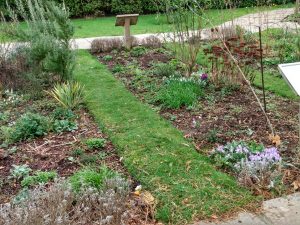 The bed that the preschool children look after is colourful at the moment, too. We’re going to have to decide which of the self-seeded flowers should stay, as they’ll be sowing peas and carrots again soon, and we need to leave room for tomatoes too – all great favourites last year!

We should have waited before putting up photos of the hellebores a couple of days ago – they’re much brighter and more intensely coloured now. A couple of queen bumblebees were landing on them this morning, a useful pitstop for hungry bees just out of hibernation. 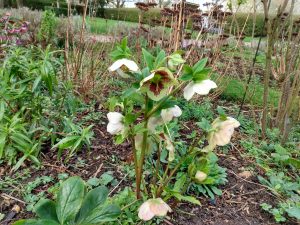 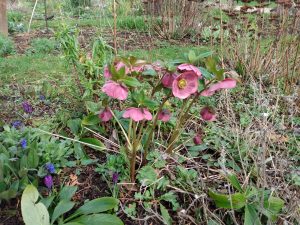 And here’s the constant hero of these gardens – the perennial wallflowers have a few flowers on them all year round, but suddenly towards the end of winter they really pick up steam. Just in time for all those emerging bees, that love them! 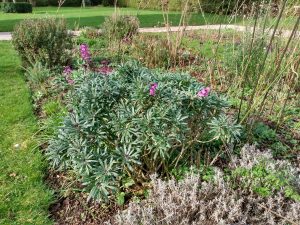 And lastly, I had a companion following me around at the gardens today,  enjoying all the bugs and worms hiding under the leaf mould mulch we put down some weeks ago: 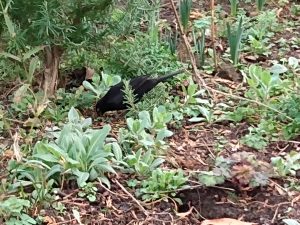 And finally today, a few photos taken over the last week, signs of spring at last!

Primroses at the foot of the plum tree 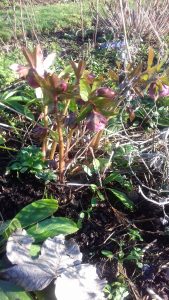 Purple hellebores in the bottom bed 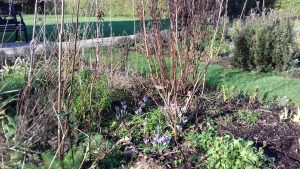 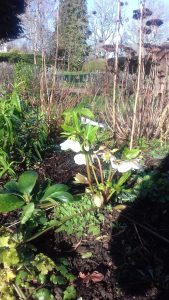 White hellebores in one of the bottom beds 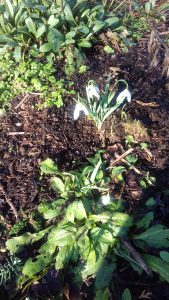 Or rather, reverting to the original name.

From 2011 or so, things began to change – the term “Mentmore Road Park” was first used then in the Town Council minutes, with ‘Mentmore Park’ appearing for the first time in 2013. The Centenary Field designation of 2014 refers to ‘Mentmore Park and Memorial Gardens’.

All these changes were thoroughly researched – in more detail than I’ve given here – by Councillor Steve Owen, and presented to the Town Council’s Grounds and Environment Committee at its meeting on 2 December 2019 (Cllr Owen’s original research sheet can be accessed in his report to the Council, which can be found on the Council’s website) . On 27th January 2020, the Town Council voted almost unanimously to revert to the original names, to honour the original sentiment of Linslade Urban District Council (the council administration in the 1950’s) to commemorate and memorialise all the men and women of Linslade who served in both world wars.

So the names of the various parts of the park will now be:

This must be the longest gap we’ve ever had on this nominally-once-a-month blog, our apologies! We’ve still been working hard, but behind the scenes, without much to blog about the visible part of the gardens.

Here are a couple of photos of the gardens a few mornings ago, when the sun caught the ‘There but not there’ soldier on the bench: 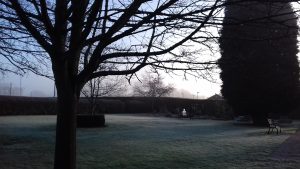 And yes, there are an awful lot of brown stems around, beginning to look scruffy. We leave them through the worst of winter, for insects to shelter and hibernate in, and to protect the new shoots that come through before the worst frosts have finished. We’ll be starting to cut them down soon, and store them in a pile round the back for a couple more weeks to give insects a chance to come out of hibernation – and then they’ll be just what we need to add to the compost bins as ‘browns# along with an equal amount of ‘greens’ to start producing this year’s compost.

What we’ve mainly been doing throughout November and December is collecting leaves for the leaf mould bin. We only have one chance to do this, a few weeks during the autumn, when we gather as many bags as we can manage by raking them up in the gardens and from several residents’ gardens, and transporting them from Dingle Dell, where Alison and Michelle look after several gardens, and let us take many of the bags of leaves they collect during the autumn. We’re also very grateful to Leighton Buzzard the narrow gauge railway when they spend a morning removing leaves from the lines and platforms. This year they filled 87 bags for us! And we are very, very grateful to the Town Council, who sent their pick-up over, with two of the grounds staff to load it and help us move them from the car park to the work area behind the Bowls Club.

Then throughout January and February, we’ve been gradually moving the bags of leaves over to the leaf mould bin as the level drops – we hope to have this finished during March. At the same time, we’re digging out bags of leaf mould to spread around some of the wildlife areas we look after, including the main gardens here, of course. We have to wait a little longer before covering the ground too thickly, as many plants we want to keep are just coming through as seedlings, along with all the ones that really are weeds here, i.e. they’ll stop other plants growing. Once we know which we want to keep, we’ll fill all the gaps with a few centimetres of leaf mould, to stop further weeds germinating, and most importantly, to be incorporated into the soil over the next couple of months by worms. We’ve been doing this for a couple of years now, to increase the amount of soil organic matter, which makes the ground more like a sponge, absorbing moisture and holding on to it for longer, so we don’t have to water so much. With the hotter and drier summers, and the same number of volunteers looking after the gardens, this is really important.

The one problem this year was that a couple of team members were injured and unable to carry bags of leaves around, let alone fling them into the (two-metre high) leaf mould bin. We managed; but if there’s anyone out there who fancies a bit of really good exercise next autumn and would like to help us then, do let us know!