One of the team took these photos last week – the gardens are really waking up now, once the irises are out, summer’s here! 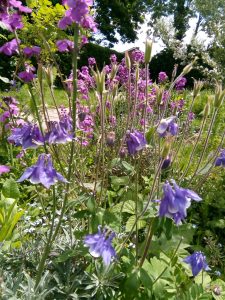 Blue and pink bee magnets! Aquilegia in the foreground, with perennial wallflower (Erysimum ‘Bowles’ mauve’) behind.

And a bee on the perennial wallflower (I think it’s a common carder bee, can anyone confirm that?) 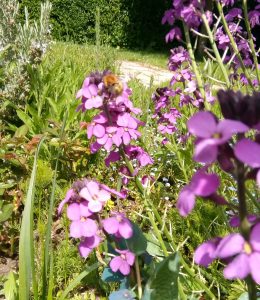 Irises – Siberian iris in the second bed up from the cross, and bearded iris a couple of beds further up: 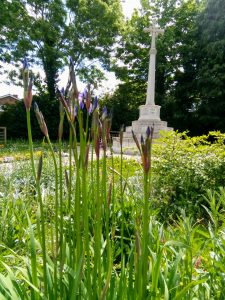 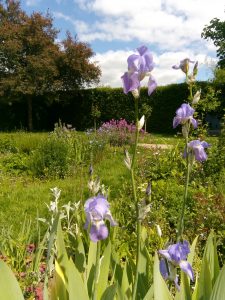 I think these irises were gifted by In Bloom after one of their plant stalls – thank you! The bees love them, and they smell heavenly.

We’re sorry the gardens look at bit overgrown at the moment, we’re gradually working through the beds, but separately, and with no work parties; only two of us are available for the moment. We’re not trying to have scorched earth between plants, but a number of plants do need more light and space around them, and we’re on it again now.

We’re also gradually working through the paths to keep weeds under control there too.

And a very big thank you to all the (socially distanced) passers by who say they like being round here, or that they like the gardens the way they are – it’s lovely to hear that!

75th Anniversary of the end of WWII in Europe 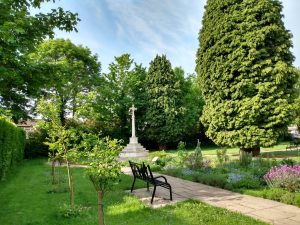 Here are a couple of photos of one of our sister sites, the patch of ground outside Bossard House, on West Street. It’s a difficult site, as it gets very little sun – the first photo shows the small part which is in full sun for an hour or two, but most of it is in shade all the time.

The site had been very neglected, but over the last few years since South Beds Friends of the Earth took it over we’ve tried to add a few bee-magnet shrubs – raspberries at the back, and St John’s Wort in the centre – and tried to establish various geraniums, deadnettles, foxgloves and teasels, with some success. They’re not all UK native wild flowers, but the site needs a little more structure than many of our bee-friendly sites do, it needs to look slightly tended. 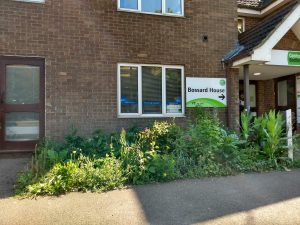 With two years of drought and very high temperatures, and no water on site, it’s been a bit of a struggle to get this framework of shrubs and key plants to establish, but they seem to have made it at last. 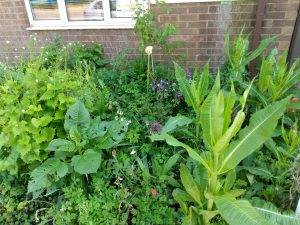 This profusion of bee-friendly plants includes a St John’s Wort, in the centre of the site (on the left of this photo) , with bugle growing underneath and in front of it; a clump of garlic mustard to the right of it, with a small teasel (Dipsacus pilosus) plant just in front of it. Towards the back there are foxgloves on the left, then raspberries, aquilegias and teasels, purple and white alliums dotted around them. Towards the front there are water avens, Welsh poppies, and  geranium macrorrhizum just coming into flower, with cut-leaf geranium or herb Robert pushing through. And this year there’s a clump of spectacular common teasels by the entrance path.

They’re all a bit on top of each other at this time of year, especially after the rain we had last weekend, but they usually sort themselves out and they all have enough room and sunlight, so we are usually quite relaxed about not weeding things out until late May; we always have it much tidier for when the In Bloom judges come through the town in mid-July.

We let the garlic mustard grow as it attracts a lot of orange-tip butterflies, which lay their eggs on it, and it’s easy to remove when they’ve finished with it a few weeks later. Similarly, we were happy enough to leave the four or five large teasel plants next to the entrance – they’ve quite spectacular and attract a lot of different insects, and goldfinches fly in and pinch the seeds as soon as they ripen. We’ve always been quite relaxed about the dandelion and ragwort plants that pop up, as they provide nectar and pollen for many pollinators, and they’re quick and easy to remove too if they’re growing in the wrong place. We’re not trying to clear large areas of bare soil in order to plant more demanding flowers, as long as the place looks reasonably tidy.

But we didn’t allow for Covid-19, lockdown, or social distancing. It isn’t possible to tend this site without risking being less than two metres from passers-by on the pavement or either of the entrance paths, so we won’t be doing anything more than removing a couple of weeds when out on permitted daily exercise, provided there’s no-one likely to come within anything like two metres. We won’t be working there, or watering. There’ll be time enough to tidy the site up when things are more normal, and in the meantime, it’ll be interesting to monitor it when passing and see what happens when we leave it alone.