It’s been a very busy few weeks, making sure the gardens are tidy for Remembrance Day, putting in bulbs for spring and various plants that we’ve grown on from cuttings, and checking that there’s enough cover for hibernating insects and our pest patrols (frogs and toads) – while making sure we’ve removed patches of invasive weeds like self-heal and clover, which would spread all over the place by spring if we don’t them down this side of the winter.

And we’ve also had a great response to our appeal for bags of leaves for the leaf mould bin, so we’ve been collecting them from various residents and businesses around the town – thank you all very much!

And of course all of this has had to be done in strict compliance with social distancing, and now, lockdown rules.

As always, the main task has been to tidy the gardens and get them ready for the Remembrance Sunday service. We do leave quite a few stalks and leaves for insects to hibernate in, and to protect the soil against winter weather, but we collect up all the leaves that have blown onto the lavender edging plants so that the edges of the flower beds are neat. It was very heartening to have a former soldier comment approvingly on the way we’ve been gardening here – I always worry that it might look untidy, but he was pleased we weren’t being too tidy – “It would be a shame to destroy all the wildlife habitat you’ve built up, just for a few days’ extra tidiness.” We do try and keep a good balance between respect for the setting, and respect for the environment more generally.

Then we put out leaf mould to protect the soil over winter, and also because it looks good, particularly in the front bed nearest the war memorial. A few years ago we put in some heucheras with coppery leaves and some with almost lime green leaves – they look great through the winter when there aren’t many colourful flowers, and putting leaf mould round them really makes the colours sing out.

A few years ago, pupils from two local lower schools made poppies for us – Heathwood made felt ones, and St George’s (now Rushmere Academy) made plastic ones. We put them out in the gardens during the first week in November, and collect them back up again after Remembrance Day itself, or after the Remembrance Sunday service if that’s later. They’re suffering from a bit of wear and tear, but this wasn’t the year to ask schools to make us some more, when they’ve only just been able to open again and catch up with all the activity they’ve had to miss. Next year, perhaps!

And even in winter, we don’t forget the bees – there are usually at least two bee-friendly plants in flower at any time, and that includes winter, as solitary bees and bumble bees will fly on any warm day, and need nectar to keep them going. By far the most popular pitstop for them is the perennial wallflower, Erysimum ‘Bowles’ Mauve’, which just flowers its socks off for a year or two, then dies suddenly. So we take cuttings every year, to keep a supply of new plants going, and we’ve just planted a few of them out in various beds, so they can spend the winter getting their roots down, ready to start flowering in about March and take over from the older plants that are still going strong. And the other flowers that will bloom through winter are the two deadnettles, red (Lamium purpureum) and white (Lamium alba), which self-sow around the gardens. We leave then wherever we can – if we decide we want the space where they’re growing, they’re very easy to remove, they’re not rapid invaders. And bees just love them! 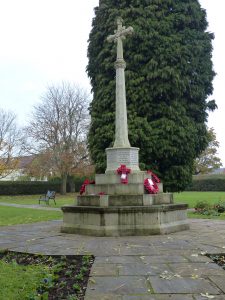 Linslade Garden of Remembrance today, after the service. 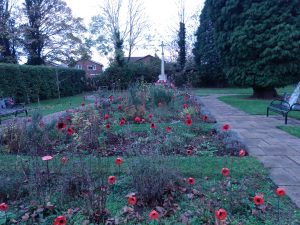 The poppies were made over the last few years by two of Leighton’s lower schools, Heathwood and St George’s (now Rushmere Academy), and members of South Beds Friends of the Earth.