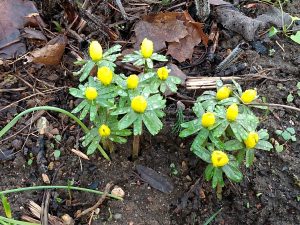 It always feels like a milestone’s been passed once they’ve made their way through the soil! These showed yellow a couple of weeks ago, then very gradually got a little bigger; and then, suddenly, they were through, nearly to the stage where they’ll open fully once we have some sunshine. They just carried on through the snow and ice of the last few days, and now it looks as though there’s no stopping them, spring’s definitely on the way

The first snowdrops are just coming through under a couple of the shrubs in the middle beds, too, it won’t be long now.

We’ve been relieved to see that the gardens have so far survived all the lockdowns and Covid restrictions, which meant we’ve had very few work parties – just a group of us very well distanced pruning the lavender back in the summer, and a couple of us weeding at opposite ends of the garden earlier on.

We’d always intended the gardens to establish well enough to carry on with very little work, but we were still really pleased this year to see that happen; one or other of us has checked on the gardens a couple of times a week whenever that was allowed, just to keep an eye on how they were doing.

We were delighted to find that even in the drought, all the leaf mould and compost we’ve mulched with has meant the soil holds moisture really well, and we we didn’t have to water anything except the roses.

Ah, the roses – the one thing that’s not done well here, which is a real shame. They’re all still alive, but getting smaller and thinner every year, which isn’t a good sign; a number of passers-by have suggested reasons, ranging from not enough sun, which is very likely for the standard roses by the Bowls Club, with not getting enough nutrients – this year I’ve been round and fed them all every week, but it doesn’t seem to have helped; it’s quite possible, of course, that something in the soil is preventing the nutrients getting through to them, despite all the compost and leaf mould we’ve lavished on them.

We’re ever optimistic – perhaps they’ve just needed a couple more years to establish, and might just flower wonderfully this year!