And apologies for our neglect of the blog. We haven’t been idle, there’s been a lot of maintenance, and compost and leaf-mould tending (they’re the engine of these gardens). And some gardening with the preschool – I love their enthusiasm and delight in things we might otherwise take for granted.

We’ve also lost a very valuable friend and member of the team – Jenny’s moved up to Scarborough. Thanks for all your help over the years, Jenny. We’ll miss you a lot.

The poppies have been and gone: 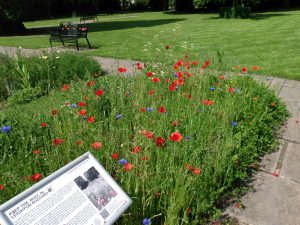 But even without the poppies, the  wild flower bed is developing nicely – although right now it justifies the comment by the landlord of a local hostelry a few years back, that it was a weed patch. That bed always looks its worst right now – from about the middle of July to the middle of August. We’re leaving seeds to mature, so we can keep the succession going; and most flowers are past their best, to say the least.

But this is a really important stage in having the poppy display every year, and having other plants carry it on. Over the next month or so, we’ll be gathering seed, and removing a lot of the old stalks and dead plants (we may well make a pile of them in the middle of the bed, where it doesn’t look too untidy, but will be there for hibernating insects and other creatures to hide in). 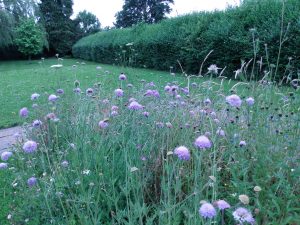 Then we need to take out one or two of the plants that are great, but taking over too much (huge sprawling scabious, anyone? It’s full of insects at the moment, but as it dies down we’ll lift it and take it to one of the larger wildlife areas that South Beds Friends of the Earth look after).

We also need to take out some of the wild carrots – they’re the white plants that look a bit like cow parsley; they have lovely decorative seed heads, but you can have too many of them if they’re stopping other flowers in the mix from growing. We’ll also clear some of the grass that might otherwise take over, then clear a lot of small patches of ground where we (or the preschool children) can sow the poppy seed in September – it grows best when it’s not fighting for space with other plants. 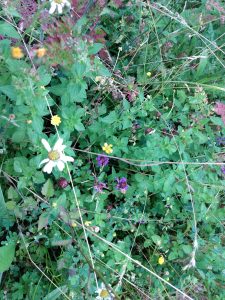 There’s a good understory developing – this is the bottom layer, many small, insignificant plants that really attract the wildlife (I’m really looking forward to the day one of the preschool children is there when a frog hops into or out of it). We have many more beetles and other insects, and quite a few frogs – there’s a whole ecosystem developing in that bed. We need to edit it, so that the bed doesn’t become an untidy mess; but we need to do it carefully, so that the increasing numbers of insects and mammals can thrive there.

And we keep remembering – if we chose to leave it to grow, it’s not a weed, it’s a wild flower.