When I joined the team looking after these gardens a few years ago, I was surprised to see that several dahlias have been planted in the bed nearest the war memorial – I didn’t realise that bees liked them. Well. I had a lot to learn; bees just can’t get enough of them. Not the very fancy pom-pom dahlias, or the exhibition ones with amazing shaped petals, but the plain ones that have simple open flowers and, it turns out, a seemingly endless supply of nectar. 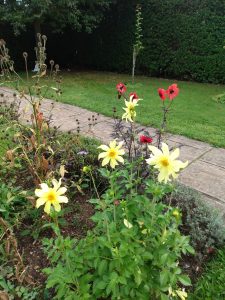 ost of the dahlias in the bed nearest the memorial are yellow, like this one: we’ve left them in the ground over winter, covered them with leaf mould, and they’ve survived fine, and even spread perhaps a little too much.

There was also a pale pink one, which we lifted and moved as the yellow ones were crowding it out. That’s now in one of the middle beds. 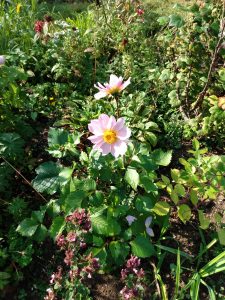 Since those early days, we’ve increased the number of plants, by lifting the tubers and dividing them after the first frost. We just might have been too successful, as this pink one 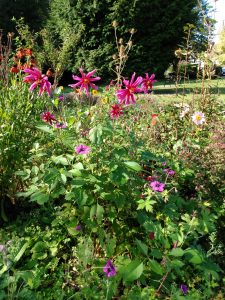 is extremely vigorous – just one plant has turned into five this year, and it’s hard finding room for them all! But they’re great at this time of year – a joy to see as the year turns into autumn, and providing plenty of nectar for bees that need to stock up before the winter.

The copper-leaved plants with red or orange flowers, were all grown from seed last year and this; the variety is called ‘Bishop’s Children’ (they’ve been bred from the well-known dahlia ‘Bishop of Llandaff’). You don’t know how they’ll turn out until they grow and flower, they’re all different, but one packet of seeds has produced many stunning plants. 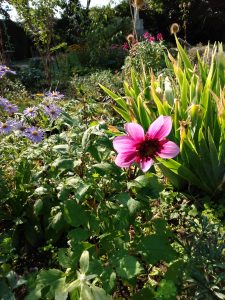 It’s called ‘Blue Bayou’, and is supposed to be the best of all for attracting bees. Well, that’s certainly true of the two that have survived and flowered, out of the five we planted (here and in our own gardens, where there was space to increase the stock). But what the catalogue didn’t tell you, was that the plant is also completely irresistible to slugs and snails. Here’s the other plant that’s here in the gardens, struggling to survive, let alone flower. A third one has vanished completely, and the last one has produced one bud, which apparently is a really tasty treat – I found a huge slug devouring it one evening.

The second Blue Bayou, after constant night-time snacking by slugs and snails

It isn’t really worth killing birds and hedgehogs by putting down slug pellets, so we’ll focus on all the other dahlias that can survive such attacks next year.. We’ll probably lift the Blue Bayou ones and grow them on in pots next year so they’re larger and stronger when they go out into the border, but I think that for these gardens, the Bishop’s Children and the vigorous, un-named yellow and pink dahlias, will be just fine next year.