A couple of times lately, someone’s asked what we do with all the plastic sacks we collect leaves in, particularly as we’re South Beds Friends of the Earth and yet we’re apparently using large amounts of single-use plastic.

At various points in the leaf-collecting process we have around two hundred bags of leaves waiting to go into the bin to make leaf mould; that’s a lot of plastic. Do the bags just get thrown away after we’ve used them? 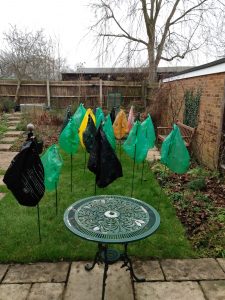 Well, no, not exactly – this was my garden yesterday, with twenty or so bags pegged to poles stuck in the lawn so that they could dry out enough to go into the loft to be stored for next year (if we don’t dry them before storage, they’re pretty rank after 10 months in the loft).

Some of them – perhaps ten per cent each year? – will have torn, or have too many holes in to be useful, but most of them can be reused and reused. The yellow one in the photo is one of the last survivors of the bags I used when I first put an ad on Freecycle (as it then was) offering to rake up leaves, to make leaf mould for my allotment. That was more than ten years ago now; they’ve lasted well.

The ones that really can’t be used again will go to ‘soft’ plastic recycling, which has got much easier in the last few years, as many supermarkets have collecting boxes for it (Tesco’s our nearest; I think some of the others have them, too).

So we think that on balance, it’s worth the amount of plastic we do have to recycle, to have enough leaf mould to make a real difference at the various gardens we look after; we’ve really raised the amount of organic matter in the soil, we’re able to water less and less every year, and the plants are thriving. And the worms love it!