Last week we had more help than usual in the gardens – some of the children from Mentmore Road Under-Fives came out to help us.

A couple of purple toadflax seeds had grown into sizeable plants in the veg (sunnier) end of their bed, so we used a garden fork to lift them carefully (two children standing on the fork at a time) and carry them down to the shadier end. 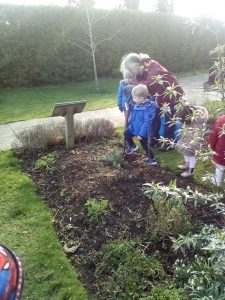 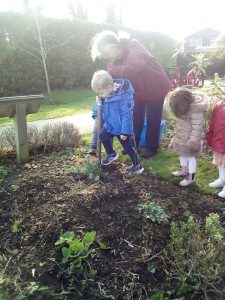 Then they dug holes and replanted them there, together with some spare foxglove plants I had. One little girl had found a small bit of conifer that had blown down in the wind, and wanted to plant that, too – hopefully it’ll grow, others have in various places in the gardens. 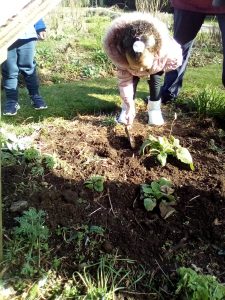 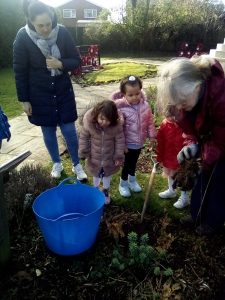 Then everything had to be watered very thoroughly, and then watered again, just in case. 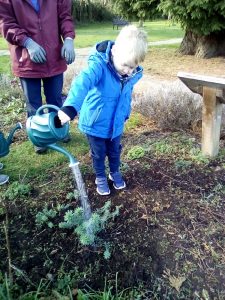 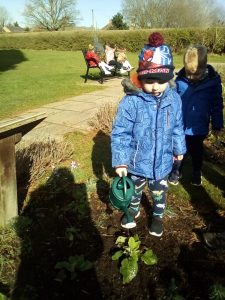 There were a lot of twigs and other sticks all over the grass, after the windy days last week, so some of the children went collecting sticks to support the peas they’ll be sowing next week.

It’s inspiring to work with them, they’re so enthusiastic!

This is lifted from a thread on Twitter this morning, by the person who started the Bee Sanctuary of Ireland

This is just a summary; the original thread, with lots of photos and more links, is here  .He’s asked us to share it more widely.

“Lots of people asking us about bumblebees at the moment – why they’re seeing them on the ground – so here’s a quick thread to explain what they’re up to. Please share as every queen that survives means a new colony that gets to exist & produce new queen bees for next year!

Bumblebee queens emerge in early spring from hibernation and immediately need to feed – that’s why early flowering plants are so important. Apart from feeding, their mission at this time is to find a suitable site to establish a nest. Hence you will observe queens flying low to the ground zig-zagging across the landscape – they’re house-hunting. Stopping to explore in long grass and vegetation, hollows in trees, stone walls, under sheds and even compost heaps. During this time bumblebee queens spend a lot of their time resting between flights.

These between flight stopovers can last for up to an hour and they are not always careful about where they take them – sometimes the middle of a footpath can be the ‘ideal’ spot. So if you see a big bumblebee chilling on the ground don’t always presume they need rescuing!

As with sleeping dogs leave resting bees lie – for up to an hour before intervening. (Unless of course she is in imminent danger whereby she should be carefully moved to a safe place). If after about an hour she is still present then she may need assistance.

In this case preference is to move her to a nearby source of nectar – a flower! If no flowers are nearby she can be offered a 50/50 mix of white sugar and water. NEVER offer her honey as although it would seem to be the obvious action honey can contain pathogens that may be harmful to bumblebees. Usually once she takes on some sugars & heats up she’ll happily fly off. Don’t bring her indoors for long periods! Thanks for reading/caring. PLEASE RETWEET this forward. The more informed, the more queens survive & the more bees we have. Simple. “

A few photos taken yesterday, as a change from long posts about different types of shop-bought compost. There were a couple of queen bumblebees around the pulmonaria – it doesn’t look much at the moment, but it’s a real bee magnet 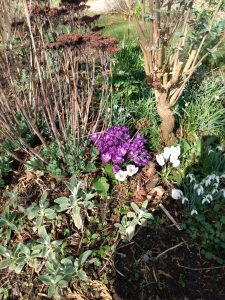 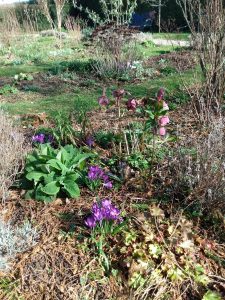 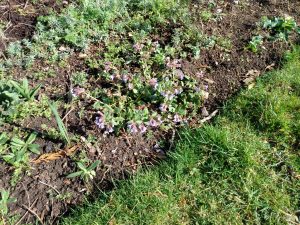 When did we all start using shop-bought composts?

This is a bit of a digression, but I though it might be interesting to look at why and when we all started using bagged composts.

Before about the middle of the twentieth century, most people made their own potting mixes, based on soil, homemade compost, leaf mould, sand, grit – whatever they had to hand or could source. They might need to add fertilizers, as the compost had to provide the right balance of nitrogen, phosphorus, potassium and trace elements. It needed to have the right amount of lime, or none; for example, if it contained too much leaf mould, it might be too acidic. It needed to be the right texture, and probably sterilised.

So the possibility of having a reliable, ready-to-use bagged compost would have been a real godsend.

This was provided by the John Innes Horticultural Institution, which was set up in 1910 as an advanced training school for gardeners, a fruit-breeding research station and an institution for horticultural experiment and research with an emphasis on plant genetics.

They needed reliable composts for their experimental plants, and rafter much research during the 1930s, they arrived at a set of formulae for different types of compost, e.g. for growing seeds, for potting-on, or for growing larger plants, shrubs and trees in containers. In 1938, as part of the war effort, they published a series of leaflets and gave radio broadcasts to publicise their new composts and other improved methods for raising garden crops. ({info from https://www.jic.ac.uk/about-us/history-of-plant-microbial-science-at-john-innes-centre/).

Incidentally, the fact that the recipes weren’t patented explains why ‘John Innes Compost’ can cover so many wildly different formulations still; and peat has been used in many interpretations of the original recipe and still is, today. The crucial ingredient was loam (soil), with the addition of peat, sand or grit, limestone (usually), and a specially formulated ‘base fertilizer’, which was mixture of organic and mineral ingredients to provide enough nutrients for a month or two.

Why peat? It was reliable, consistent, and very very cheap to produce in large quantities. It’s said to hold water better than anything else (as long as you don’t let it dry out completely, when it can be very hard to get it to take up water again!). And it can be used in the many machines that have made industrial plant growing possible – for example, in the soil-blocking machines that produce the huge numbers of plug plants bought in from the Netherlands and elsewhere, to be grown on for sale.

Since these composts were first introduced, the industry has grown beyond all recognition. Once garden centres started up in the 1970s, many manufacturers have developed large ranges of different composts for different purposes, which made it so much easier to choose the right growing medium. Most of them don’t use soil at all (which makes them much lighter – suddenly, even if you didn’t have a garden, you could just go out and buy some compost to fill a few pots and have a few plants on a balcony, or just outside the door. The convenience and predictability of these composts meant that over the years, we’ve all begun to feel that they’re absolutely necessary in order to grow anything. That’s not quite the case – but we’ll look at that in the next post.

Every year about this time we start thinking about what we’re going to grow, in whatever space we have – a houseplant on the windowsill, a pot on a balcony, a few more plants in the garden, an allotment-full of vegetables. And every year about this time, this blog starts banging on about peat, and why we shouldn’t be using it – for example, see here, here and here.

This year we thought we’d do something a little different, and look first at when and why we all started using peat, and how we gradually began to think it was essential (but it isn’t). Then in the following post, we’ll look at ways of cutting down on our use of peat, in addition to just buying peat-free compost (at least one common use can actually waste your money, and damage the soil too); and as there are a few things that have to be done a little differently when moving over to peat-free composts, we’ll look at that, too.

Over the last two or three years there has been a little progress, both in an increased awareness of the problems of using composts based on peat, and on the quality and availability of peat-free composts.

Indeed, we won’t be updating the list of suppliers around Leighton Buzzard this year, for the excellent reason that suddenly most places that sell multipurpose compost are selling peat-free versions, and they’re not necessarily more expensive – though we will look at why it’s worth paying more for any multipurpose compost you buy, to save money in the long run.

For the last ten years, the government has said the problem of using peat can be resolved by voluntary means, run by the horticulture industry. Sadly this hasn’t happened – target after target has been missed, and at the current rate of progress, forecourts will still be piled high with peat-based compost in thirty or forty years, which is far too late for maintaining a liveable planet.

The government recently proposed to ban the use of peat in compost produced for retail use (that’s us) by 2024. As the largest sections of the industry are finding it hard to follow their many colleagues who gave up using peat years ago, it’s proposed that their use of peat will also be banned, but by 2030. Defra (Department for Environment Food and Rural Affairs), has a current consultation on this, and we urge you to go and complete it at https://consult.defra.gov.uk/soils-and-peatlands/endingtheretailsaleofpeatinhorticulture/