A couple of years ago, a passer-by in the gardens congratulated us on managing to get a good display of poppies year after year. That surprised me – we knew that poppies grow on disturbed ground, so weused to let the seed ripen and fall on the ground, then turn the ground over and .sow more seed, for good measure. And the poppies grew every year, and put on a great display. 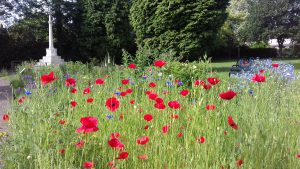 “Ah,” he said, “but it needs to be newly-disturbed ground. Not disturbed every year.”

That set us thinking – how were we going to have newly-disturbed ground every year? Or at all?

So for the last three years, we’ve raked it, but not turned the soil, so that in two or three years we could fork it over and have that elusive ‘newly-disturbed’ soil again. And hopefully, we’d still have poppies for those years, and then a much better, newly invigorated display once we’d disturbed it again.

Well, we’ve left it one year too late. There are hardly any poppies this year, and those there are, are small and weak. The same for cornflowers. At least the corncockles will be amazing, and they’re coming out now. After they’ve all flowered, we’ll let some seed drop, and collect the rest, then fork the soil over and hope very much that that counts, and that we’ll have a good strong display of poppies again.

It’s a very artificial conceit, this idea of ‘wild flower gardens’ – they’re not nearly as manageable as good old cultivated garden flowers! That end bed isn’t a meadow, which would have mainly perennial flowers growing through grass; it mainly has cornfield annuals in it, like the poppies, cornflowers, corn cockle and corn marigold. They’re often described in the media as ‘wild flower meadow’, but usually nowadays corn cockles and cornflowers have been deliberately sown. (Poppies do indeed just spring up when the soil’s been disturbed – you can see hundreds of them where the soil’s recently been turned for a new road.

So when the annuals have died back this year, we’ll take them out and turn the soil in that bed before resowing. Hopefully that will count as newly-disturbed … And at least there are a few clumps of later-flowering wild flowers, like scabious and knapweed, which wiill keep the show going this year.

In the meantime, do look at the wonderful opium poppies (the large scarlet ones) a couple of beds away, on the right if you’re standing with your back to the car park. We had some orange ones for several years, then the plant got pulled up – and a kind visitor to the gardens was so concerned by it, that she went straight home and fetched me some seed from the plants in her own garden, so that we’d still have some of the same poppies. The ones in flower right now are hers – if by any chance you’re reading this, thank you very much!