The team was out again yesterday, raking up more leaves from the grass around the flower beds. We filled about twenty-five more bags; most of them went straight into our leaf bin, as the level had dropped enough.

They’ll stay in the bin for about eighteen months. When we started making leaf mould, we used to turn the heap if we had time, but in fact it rots down pretty well without that. As we empty the leaf mould we just throw unrotted leaves, sticks etc. over the netting dividing the two bins, and it goes back round again.

The leaf mould is really useful as a soil conditioner. Over the last two or three months we’ve been putting it round many of the plants in the beds, so that worms will take it down into the soil over the winter; and in the spring, we’ll put another layer of it down as a mulch to keep moisture in the soil.

The remaining three or four bags of leaves were distributed round the beds as a protective mulch over the winter. We don’t do this till after Remembrance Day and Remembrance Sunday so they aren’t blown onto the paths, to keep the gardens as tidy as possible for the services.

This mulch of dead leaves does three things: it helps us keep the soil covered (so it doesn’t get damaged by heavy downpours or compacted snow); it’s great for wildlife – the leaves provide hiding and hibernating places for insects, which in turn helps feed birds over winter; and it helps protect the more tender plants (i.e. ones that can be killed by frost, like dahlias and salvias) by forming a layer of insulation over their roots. We still have one dahlia in flower! 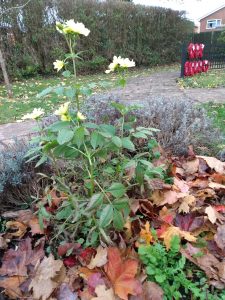 And this year, we had a lot of bright red leaves from the Liquidambar tree in the middle of the grass – so they also gave us a last burst of autumn colour.