Someone said this last week, during a discussion about how we try and have at least two bee-friendly plants in flower all the year round, and how tricky this can be, not just in December and January, but also in June when many of the early summer flowers are dying off before the July-to-September ones come into bloom.

People quite often suggest that we use more bedding plants, which makes me wonder why our instinct is not to do just that. I think there are several reasons – sustainability (volunteer time and the need to water much more often, as well as more use of plastic pots and everything else needed to grow the plants), the difficulty of finding bedding plants grown in peat-free compost and the fact that we’ve not been successful in growing our own. And of course, commercially-grown plants have frequently been treated with hormones to make them flower earlier and longer, and/or insecticides, so that they are perfect at the point-of-sale. Neonicotinoid pesticides aren’t being used nearly as much as they were a couple of years ago, but we’d still prefer not to use plants treated with any pesticides.

The main reason is probably that very few of the bedding plants we could buy are attractive to bees (so in the end it doesn’t matter much that they’ve probably been treated with insecticides, as the bees won’t be collecting nectar or pollen from them). We’ve restricted ourselves in the Memorial Gardens to only growing plants that are particularly attractive to bees, so that excludes the use of most bedding plants in the bee-friendly areas that South Bedfordshire Friends of the Earth look after.

On the other hand, the Town Council are very good at growing bedding plants, and we’re fortunate to have two of their beds next to our own, next to the war memorial itself, and full of beautiful and colourful plants. So we have the best of both worlds here! 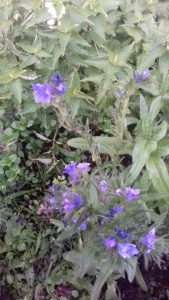 We’ve over-reached ourselves. Following the success of the many bee habitats planted by South Bedfordshire Friends of the Earth around Leighton Buzzard – mainly with easy-to-grow annual wild flowers, and perennial garden and wild flowers – some of the SBFoE team thought they’d try growing bedding plants, partly to try and persuade the Town Council to grow more bee-friendly plants in their formal beds around the town.

The problem with bedding plants is that they’re specially bred to bring out specific characteristics – flowering for several months (if they’re dead-headed regularly), or being compact, or having particularly bright flowers, and so on. Unfortunately, during the breeding process the ability to produce nectar or pollen is often lost, so they often aren’t useful for bees and other pollinators.

We found several bedding plants that are reputedly very attractive to bees, so we thought we’d try growing them, possibly with the intention of persuading the council to try some of them. We had already used Cosmos bipinnatus ‘Rubenza’ successfully for the last couple of years, so this year we added Echium ‘Blue Bedder’, Reseda odorata (mignonette), and the French marigold ‘Disco’, all grown from seed. We sowed them in our now-standard moisture-retaining mix of New Horizon peat-free potting compost, and leaf mould (about 30:70), and we tended them under cover until they were ready to be planted out. We didn’t buy them in from a local grower as they would have been grown in multipurpose compost containing peat, and we don’t use it (see our blog post on Peat from 04 April 2017).

We learned a lot, though not necessarily what we were expecting.

First – we can’t hold a candle to the professionals for horticultural ability. Although the cosmos were fine as usual, the echium plants were spindly and very slow to grow bushy, and needed coaxing to become strong enough to plant out. In contrast, the marigolds grew away really well – but they were slug magnets before they had a chance to become bee magnets. And the mignonettes – we practically had to coax each leaf out of them, they were very slow to develop, spindly and greedy (the first leaves started turning brown after only a month from lack of food in the potting mix). Eventually we managed to grow a dozen marigolds and a couple of dozen echiums and mignonettes, and the preschool has helped us plant them out over the last couple of months or so, after the risk of frost had passed. They all got there in the end, but they took a lot more time and effort than all the other plants in the garden – and we’d been taking loads of cuttings of penstemons, geraniums, hyssop and other herbs, and they’d just taken straight away, and grown on with very little TLC needed.

Second – we just don’t have enough volunteer time to look after needy bedding plants while they get going. The echiums are great, and bees love them, and the mignonette smells great, but we have to be ruthless about what works and what doesn’t, and we have to accept that we don’t have the resources to make bedding plants work when a bit of hyssop pruning will feed many times more bees.

Third, and most importantly – after we’d gone through all the stages of the bedding plant experiment, we suddenly realised one very important problem that just hadn’t occurred to us at the outset – namely that if we did persuade the council to use these plants, they’d need to buy them in from a professional grower. And almost all growers who can provide the kind of quantities they need would have used neonicotinoid pesticides from sowing onward, to ensure perfect-looking plants – so if they did attract bees, they’d be killing the very pollinators we’re trying to protect!

A couple of major chains have said that by 2018 they’ll be selling plants which haven’t been grown with bee-harming pesticides (though probably they’ll still be grown in peat), and that’s a start. So perhaps it’s better if we just sit back and enjoy the town council’s stunning bedding displays that won’t hurt any bees – have you seen the amazing beds round the town centre at the moment? – great colours working together, well tended plants, a great display. And we’ll carry on putting hardy perennials and annuals together as well as we can, and leave bedding plants to the professionals.