“Why are you cutting down our bees’ lavender?”

“Why are you cutting down our bees’ lavender?” said a voice behind me while I was pruning the lavender bushes along the paths. The voice belonged to one of the older children from the local preschool, who often come and help us and watch the bees, dragonflies and other insects as they visit the different flowers – clearly the message had got through!

I explained that the flowers were over for this year, and we needed to trim the plants back so that they’d produce lots more flowers next year. ‘Next year’ is probably quite a vague idea when you’re not yet five, but fortunately the explanation was accepted. Bees visit many other flowers at the moment (we try to have at least two ‘bee magnets’ in flower at any time throughout the year), but it’s true that they go straight for the lavender when it’s out.

The lavender border was started a couple of years ago, when we realised that we needed more structure in the gardens so that they carried on looking good after most of the flowers had faded, particularly as we tend to leave seed heads for insects to hibernate in over winter, and just to look good when there’s not much else happening in the dark cold days. This could look untidy without the more formal structure of the lavender border. Most of the plants are compact varieties – Hidcote, Munstead, Dwarf Blue, Little Lady, Arctic Snow – as although the larger varieties attract more bees, they’re also much harder to keep in check, and would soon take over the paths as well as the beds.

The standard memory aid for pruning lavender is ‘8:8:8’ – prune the bush to eight inches on the eighth day of the eighth month. Not quite so effective if you think in metric! But the general rule applies – trim the plants as soon as they’ve finished flowering, to roughly 20cm all round. Hopefully, we still have a couple of months of warm weather to encourage them to put out new shoots and fill out a little before they stop growing for the winter.

However, to mollify the child who was worried about the bees having no lavender to visit for nectar, we’ve left a few of the later flowers for them! 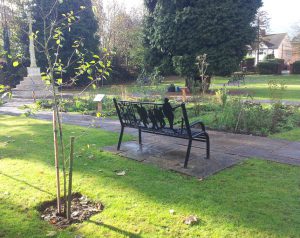 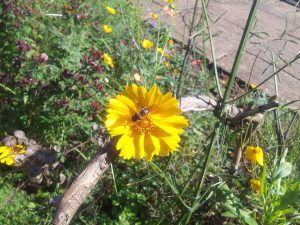